Billy Bump enjoyed Babysitting!  Now, he did not babysit…but he enjoyed being babysat by his cousin Linda!

Linda was Harry Hayes sister…and Billy’s favorite!  If the truth was revealed…he had a little crush on her!

Linda usually babysat Billy on Friday nights.  This was the night that Billy’s mom, Jane, liked to honky tonk!  Billy thought that honky tonk was a very unusual term for dancing and drinking slow gin fizzes…but it was a common vernacular in Billy’s day.

Billy and Linda and, often, Carl, would watch the Friday night Science Fiction Theatre.  It ran everything from the movies, This Island Earth, to the, Mole Men, and It Came From Outer Space.  Also, every other week it had horror movies such as, Dracula, and Frankenstein, and the, Curse of the Mummy, with Boris Karloff.

Dracula was one of Billy and Carl’s favorites and Billy had purchased a model of Dracula, as portrayed by Bela Lugosi, and had not only glued it together but also had hand painted it!

The movie was well underway when a particularly scary part was showing and Linda pinched Billy’s arm that was under the covers that the three of them were covered with!  Billy uttered a shriek and Linda and Carl laughed until tears came to their eyes!

Billy was a little beside himself and decided that he needed a rest room break to gather his thoughts.  As he was washing his hands…he heard a strange sound coming from the front porch of he and his mom’s house on 6th street in El Dorado. 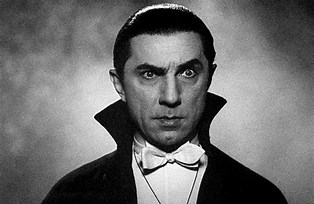 As he turned on the porch light and walked out, slowly, he observed that all seemed to be in order…accept the baby bat that was hanging upside down from his porch roof.

Billy could not recall when…if ever he had seen a bat in El Dorado…and especially hanging from his front porch!

He ran into the house and exclaimed for Linda and Carl to come and see the bat on the front porch.

They both arose from their warm cover and the engaging Dracula feature and sauntered out to the porch.  When they arrived…the bat was gone!

Carl laughed and remarked that Billy was seeing visions inspired by the movie!  Linda smiled and told Billy not to worry as she would protect him from Dracula.

Carl remarked, quietly and under his breath, that vampires are real.

One thought on “Babysitting…”